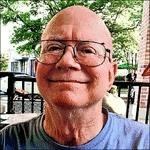 PAUL MITCHELL BLOSE, JR.  CAPT. NC USNR (Ret.)  CAPT Paul Mitchell Blose, Jr., NC, USNR (Ret.), age 71, of Annandale, VA, passed peacefully at home surrounded by family and his beloved cats on September 28, 2020 from complications caused by a stroke. Paul was born in Lawton OK to Lucille (Stiteler) Blose and Paul Mitchell Blose, Sr. on June 7, 1949. He was raised in Punxsutawney, PA and attended the Indiana University of Pennsylvania where he studied nursing. In May 1979 Paul joined the U.S. Navy Nurse Corps where he served for 30 years combined active duty and reserve time, eventually retiring in 2009 at the rank of Captain. He also worked for 20 years at the Washington DC VA Medical Center as a nurse and in computer security, eventually becoming the Center's Information Security Officer. He retired from Federal Service in 2015.Paul was highly active in the Cat Fanciers Association (CFA) for over 30 years, first showing Maine Coons and Norwegian Forest cats, and then Balinese and Javanese cats. He was also a member of the Potomac Valley Shetland Sheepdog Club, serving on their Board for 10 years. He is survived by his beloved wife, CAPT Virginia Torsch, MSC, USNR (Ret.) and his brother Dave (and Karen) Blose, and his sisters Kathy (and Harold) Stamler, Nancy Anthony, Debbie (and Frank) Jenkins and Beth Fetterman. There will be a short Celebration of his Life on October 24 at the Coyote Grille restaurant (one of his favorites) in Fairfax City VA on October 24, and internment in the Arlington National Cemetery at a future date. Paul will be sorely missed by his wife, family members and all his fellow Nurse Corp Officers.