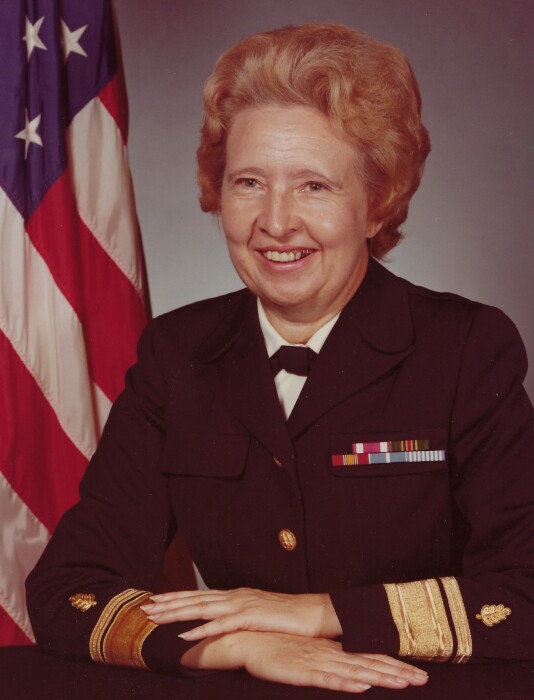 Our loving sister, aunt, friend and patriot, Rear Admiral Maxine Conder, USN Retired, passed away peacefully on Monday, October 18, 2021, in Layton, Utah. Maxine was born on April 20, 1926, in Bingham Canyon, Utah, the oldest of seven children of Peter A and Theo Adams Conder. From the age of two to twelve Maxine lived in American Fork, Utah. In 1938, her family moved to the mining town of Ophir in Tooele County where her father worked at the ore mill. There she attended a small school which only held two classes, first through fourth grades in one room and fifth through eighth grades in another room.  In 1940, the family moved to Tooele and Maxine graduated from Tooele High School in 1944.

While in school, Maxine worked part-time for Dr. Aldous and Dr. Peck in Tooele. After graduating from high school Maxine enrolled in the Cadet Nurse Corps and earned her nursing degree from St Mark's Hospital School of Nursing in Salt Lake City, Utah in 1947.  She came back to Tooele and worked in the clinic for Dr. Milburn and Dr. Mayo. In 1951, she enlisted in the Navy as an Ensign to fulfill her obligation to the government for paying for her schooling.

Maxine spent 28 years in the Navy progressively advancing in rank, which involved her in many military conflicts including serving on the hospital ship the USS Haven when assigned to Korea in 1953.  In January 1953, she was appointed to the rank of Lieutenant Junior Grade. She then moved on to serve in a US Naval hospital in Guam (1954-1955) participating in the opening of the new Naval Hospital. She was then assigned as a Charge Nurse of an active polio unit in Chelsea, Massachusetts, earning the rank of Lieutenant. She returned to the West Coast to serve at the Naval Hospital in Camp Pendleton, CA where she remained until 1960, earning the rank of Lt. Commander. She then came back to Utah to attend the University of Utah, earning her bachelor's degree in nursing in 1962.

As a Lt. Commander Maxine was assigned as a Nurse Programs Officer at the Naval Recruiting Station in Seattle, Washington while working on her Master of Nursing from the University of Washington, graduating in 1966.

From 1966 until 1968, she was assigned as Assistant Chief Nurse, Camp Lejeune, North Carolina.  While there she was promoted to Commander. Maxine then served at Guantanamo Bay, Cuba (1968-1969) as Chief Nurse. Returning to the United States in 1969, she was assigned to the Naval Hospital in St Albans, New York. In 1970, she again received a Chief Nurse Assignment and was transferred to the Naval Hospital in Portsmouth, New Hampshire.

Her selection to Captain in September shortened her assignment in Portsmouth, and in December 1970 she transferred to serve as Chief Nurse to Naval Hospital Boston at Chelsea, Massachusetts. In February 1974, she was transferred to the Naval Regional Medical Center in Philadelphia as the Chief of Nursing Service. Once again, her tour was shortened by selection as a two-star Rear Admiral in July 1975, making her the second woman to be selected for flag rank in the US Navy.

Maxine was then transferred to the Bureau of Medicine and Surgery in Washington DC, assuming the title of Director of the Navy Nurse Corps. She was the administrator responsible for 2600 Navy Nurses stationed around the world.

She was honored by the University of Utah in 1977, when she was selected as "Distinguished Alumnus".  In 1977, Maxine accompanied a group of nursing leaders on an American Nurses Association sponsored tour of the People's Republic of China, thus being one of the first military officers allowed in China since 1949.

She was again honored by the University of Utah in June 1988, when she was awarded an Honorary Doctor of Science Degree. Maxine was honored at the Women's Walk at Utah Valley University as one of Utah's most influential women for her distinguished career and contribution in the US Navy.

In July 1979, after having served for 28 years, she retired from the Navy. Maxine's dedication and service to this country had a significant impact on the careers and advancement of women in the military which continues as her legacy today. In 1982, Maxine retired to Layton, Utah and began enjoying civilian life. During the next eight years Maxine served at The Church of Jesus Christ of Latter-Day Saints Ogden Temple as a supervisor. She enjoyed spending her winters in Washington, Utah and summers in Layton. In 2017 she moved to Fairfield Village, Layton, Utah and enjoyed making many new friends.

Maxine is survived by sisters, Theo Ann Palmer, Janice (Al) Whichelo, and Vickie (Carl) Jones and numerous nieces and nephews who loved and cared for her. She is preceded in death by her parents, brothers, Jack Conder, Frank Conder and sister Betty Park.

Funeral services will be live-streamed and may be viewed at www.lindquistmortuary.com and scrolling to the bottom of Maxine's obituary page.

Interment will be at Arlington National Cemetery, Washington DC, date and time to be announced at a later date.

We want to thank the management and staff at Fairfield Village for the care they showed for Maxine and the wonderful two Angie's and Autumn, caregivers at Encompass Hospice. In lieu of flowers please donate to the Utah Food Bank (utahfoodbank.org/give-money/) and be sure to hug a nurse.