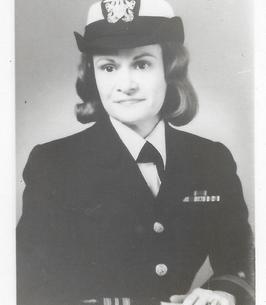 Marion Louise Birkhimer, 88, of Ocala Florida passed away on August 8, 2020. Marion was born in Johnstown Pennsylvania on February 8, 1932, the second daughter of Charles and Marie Birkhimer, sister to five siblings and aunt to numerous nephews and nieces.

Marion entered the United States Navy in 1958 and served 28 years of active duty as a nurse. During her career, she embraced 13 duty stations including Japan, Guam, the Philippines, Vietnam, and Korea. Marion was a graduate of the University of Maryland BS in nursing and a master’s degree from West Florida University. Marion was promoted to Captain in 1975 and retired on December 30, 1984.

Marion loved to travel on vacation touring Spain, Turkey, France, Israel, Switzerland, Germany, and England. Marion was highly involved in Christian ministry serving at St Matthew’s Lutheran Church and St. John’s Lutheran Church in Ocala. She met, and was blessed by, Pope John Paul, walked the Holy Land and Suramin the Dead Sea. She worked with Holy Community to assist with homebound members, Hospice, assisted pastors in Last Rites for members, and worked on the Altar Guild. Marion continued serving others throughout her life spending days calling and writing members of the Ocala community to keep lifelines open and God’s word alive.

Marion is survived by her brother Charles Birkhimer of Ocala Florida and numerous nephews and nieces.