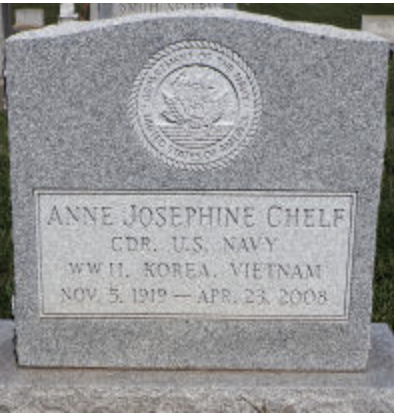 A native of Culpeper, Comm-ander Chelf was born Novem-ber 5, 1919, daughter of the late, Dr. Hugh Tucker Chelf, Sr. and Mary Genevieve Payne Chelf. She was a retired United State Navy Commander where she served as a Nurse during World War II, the Korean Conflict and the Vietnam Era. She graduated from the University of Virginia Nursing School after completing two years at Farmville State Teachers College. She also attended the University of Pennsylvania.

She was also preceded in death by one brother, Dr. Hugh Tucker Chelf, Jr.

She is survived by her brother, Charles Fielding Chelf, of Manassas and her niece, Mary Jo Outland and husband, Joseph, of Manassas.

The family will receive friends from 10 to 11 a.m., Tuesday, April 29, 2008 at Pierce Funeral Home, 9609 Center Street, Manassas where funeral services will be held 11:00 a.m. Tuesday. Interment will follow at Fairview Cemetery, Culpeper, Virginia at 1 p.m.

Condolences may be sent to www.piercefh.com.