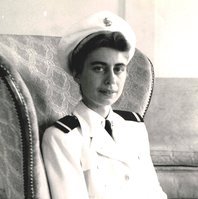 Margaret Jackson Blair
March 20, 1916 - November 17, 2015
Resident of Santa Cruz
Friends and family will be gathering Tuesday, to remember Margaret Jackson Blair who was born March 20th, 1916 in Los Angeles. She was the first child of two children born to Charles and Rose (Mackman) Jackson. Charles died in an industrial accident when Margaret was 4 and her sister, Rosa May was two. Later her mother married Walter Weir during Margaret's teenage years.
Her early years were in the Berkeley area and where she furthered her schooling at Samuel Merritt Hospital, in Oakland to become a Register Nurse. In January of 1942 she was called to enter the Navy Nurse Corps where she served as a Lieutenant Commander until April of 1948.
In 1949 Margaret married Walter G. Blair in Santa Cruz and began married life in Aptos on an apple orchard. Margaret worked for Dr. Paul Weiss, old Dominican hospital and what they call Kindred now. In her retirement she cared for many people in her home. She took art lessons and enjoyed many years of painting. Also, her daily morning walks on the beach at Twin Lakes. The last nine years she lived at La Posada retirement home where her smile will be missed.
She is survived by her three sons, Richard Blair of Capitola, Walter (Bonnie) Blair of Alta and Dennis Blair of Santa Cruz. Two daughters, Carol (Brad) Anderson of Saratoga and Margaret Rose Blair of Santa Cruz. Four grandchildren, Jennifer (Blake) Weaver, Tyler (Gabby) Anderson, Brieann (James) Lizardo and Chloee Blair.
We wish to thank our caregivers from Life Span and especially Sharon Fassio and Hospice of Santa Cruz County. Also an extra thank you to La Posada and her art teacher Marti Mariette.
A Funeral Service will be held for Margaret on Tuesday, November 24, 2015 at Benito & Azzaro Pacific Gardens Chapel, 1050 Cayuga Street in Santa Cruz beginning at 11:00 am. The burial will immediately follow the service at Pajaro Valley Memorial Park. A viewing will be on Monday, November 23, 2015 at Pacific Gardens Chapel from 5:00 – 8:00 pm.