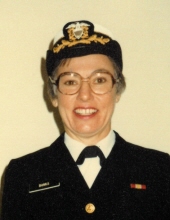 SOUTH PARIS - Retired Navy Commander Audrey Estelle Banks, 82, died Monday May 11, 2020 at her home.
She was born February 10, 1938 in Lewiston the daughter of the late Ralph C. Banks and Frances “Betty” French Banks, and sister to the late Robert C. Banks.

Miss Banks lived in Portsmouth, Rhode Island from 1975-1997, moving to South Paris in 1997. She served in the United States Navy Nurse Corps for twenty years and retired in 1979 as a Commander. Her duty stations included hospitals in the United States , Kenitra, Morrocco and Guantanamo Bay, Cuba. Prior to entering the service, she lived for many years in Lawrence and Methuen Massachusetts. She graduated from Lawrence General Hospital School of Nursing in Lawrence, MA in 1958. She received a Bachelor of Science degree in Nursing from the University of New Hampshire in 1975 and a Master of Science Degree in Nursing from the University of Rhode Island in 1982. She also received a Master of Arts degree in Holistic Counseling from the Salve Regina University in 1986 in Newport, Rhode Island. After retiring from the Navy, Audrey worked in Rhode Island nursing homes, and home care agencies and was also the clinical instructor at Salve Regina University. She volunteered for the American Red Cross, American Cancer Society, and Island Hospice as a bereavement coordinator. She also had a private practice in counseling, stress management and Kriegar/Kunz model of Therapeutic Touch.
Audrey enjoyed being a part of the knitting guild and her special pool group. After her dog, Susie, passed away she continued to share her love of dogs with the rescue dogs at Responsible Pet Care.

She leaves a cousin Sharon Tibbetts and her husband Robert of Newton, NH; a cousin Sandra Miller of Fort Lauderdale, FL; cousins Jill Ann Banks and Sherrie Mae Banks; a sister-in-law Carol Banks of Dixfield. Many extended family members, neighbors, Church friends, a best friend Becky Armstrong and her husband Albert, other local friends and many Navy friends scattered throughout the country.
A graveside service will be announced at a later date.

Donations may be made to the American Cancer Society, First Congregational Church in So Paris, or Responsible Pet Care.
Arrangements are under the care of Chandler Funeral Home, 45 Main Street, South Paris
Online condolences may be shared with her family at www.chandlerfunerals.com