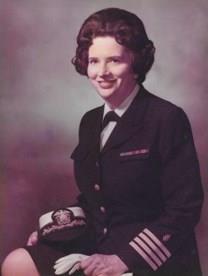 Anna M. Byrnes passed away peacefully on Sunday, August 6 after a 99-year life dedicated to family, country and God. Born in Stamford on April 2, 1918, Anna was the eldest child of Patrick and Elizabeth Byrnes. She attended St. John Parochial School and Stamford High School. Anna graduated from the Norwalk Hospital School of Nursing, and taught Red Cross volunteers to work as nursing assistants. Fully intending to join the military as a nurse, Anna's plans changed after her brother Patrick, Jr. was killed in World War II, and she remained at home with her family. Ultimately in 1945 she applied for the Navy Nursing Corps and was called to active duty in July 1945. When the war ended, she remained on active duty for a year before returning home to Stamford. Anna was a nursing instructor at Stamford Hospital and completed her bachelor's degree at New York University. While still in the Navy Reserves, Anna got orders for sea duty as senior nurse on the USS Butner transporting military and their families to and from Europe. Anna enjoyed her work in the Navy and applied for a full-time career in 1951.

Anna's Naval career saw her as an instructor at the Hospital Corps School in Great Lakes, Illinois, as the Recruiting Director for Navy Nurses during the Korean and Vietnam wars, and as the assistant to the Inspector General Medical for Nursing. This final position brought Anna around the world, inspecting hospitals in the U.S., Japan, Philippines, Australia, Spain, Italy, Cyprus, Egypt and Morocco. Over the course of her career she worked in Naval hospitals in Rhode Island, Texas, Iceland and Maryland. Anna retired in 1975, attaining the rank of Captain.

Upon retirement, Anna returned to Stamford and enjoyed time with her family and friends. She enjoyed painting, anything on PBS, gave Tai Chi a try, was amused by Facebook and read absolutely anything she could get her hands on. She continued to travel to visit family in California, Florida, Oklahoma, Ireland, as well as to Italy when she was eighty-years-old. As her mother and siblings declined in health, Anna was always the nurse, right there to comfort and soothe them. A longtime parishioner of St. Gabriel's parish, Anna cherished her Catholic faith. She was a sponsor in the RCIA program at the church, and valued time spent with her Rosary and at Mass. Her absence in the Byrnes family will be as immense as her presence was in our lives.

Calling hours will be Friday, August 11 from 6-8PM at Leo P. Gallagher and Sons Funeral Home, 2900 Summer St., Stamford. A Mass of Christian Burial will be held on Saturday, August 12 at 10:00 AM at St. Gabriel's Church, 914 Newfield Ave., Stamford. Interment with military honors will follow at Queen of Peace Cemetery, 124 Rock Rimmon Rd., Stamford.

Generosity was at the core of Anna's life. In lieu of flowers the family requests that donations be made in Anna's memory to St. Gabriel's Church.