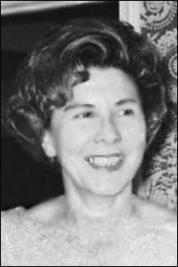 Anna H. Cullenward Sept. 20, 1916-June 8, 2009 Anna Cullenward passed away on June 8, 2009, in Sunnyvale, CA, from complications due to a series of strokes. To the very end her incredible strength of will, courage, love and care for her family was apparent, and often showed itself in her uniquely funny sense of humor. She was the wife of Nelson Cullenward, former sports writer for the S.F. Examiner, who predeceased her in 1993. They had been married for 46 years. Anna was born on September 20, 1916, and was raised in Mansfield, Ohio, the only daughter of Rose and Joseph Menrath. She received her schooling in Ohio where she went to college and then nursing school in the 1930's. She worked as a nurse until WWII, whereupon she enlisted in the Navy and joined the Navy nurse corps. There she served in New Guinea, Oak Knoll and San Diego, rising to the rank of Lieutenant. She met Nelson while stationed in San Diego at the end of the war, and they were married in 1946. Anna is survived by her five children, Eric (Laurie) Cullenward, Rose Cullenward, Martin (Michele) Cullenward, Michael (Joan Knoebel) Cullenward and Mary (Dan) Hall, raised with love and selfless care in Los Altos Hills, CA., and her eight grand children. Anna started a second career teaching at Ford Country Day School, a private school in Los Alto Hills, where she was known as "Mrs. Ward". She eventually became vice principal and worked there until her retirement in 1981. She was also active in the Los Altos chapter of the Children's Home Society, co-chairing an annual major fundraiser via a golf tournament attended by businesses and celebrities alike. She and Nelson retired to Boulder Creek, Calif., where she served on the board of the Redwood Association of the Boulder Creek Country Club. There will not be a funeral service, but donations may be made in Anna's name to the Children's Home Society. They may be contacted at www.chs-ca.org/rg.html.