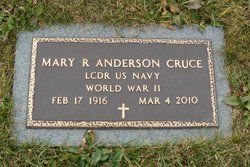 On Thursday, March 4, 2010, retired Navy LT. Commander Mary Ruth Anderson Cruce, of Christiansburg, Va., died of natural causes at Wheatland Hills. She had recently celebrated her 94th birthday. Mary Ruth was the daughter of the late John Clifford and Winnie Whitlock Anderson. She was born in West Virginia and raised in Christiansburg. Upon graduation from Christiansburg High School, she entered the University Of Virginia School of Nursing. Graduating with a degree in nursing, she entered the prestigious Barnes Hospital in St. Louis, Mo., where by she fulfilled her first position as a registered nurse.

During World War II, Mary Ruth joined the Navy Nurse Corps and was commissioned an Ensign in the United States Navy. She served aboard the hospital ship, USS Samaritan in the Pacific and witnessed action at the Battle of Saipan, Iwo Jima and Okinawa. Upon returning to the states, after the war, she continued her naval career and was stationed at the U.S. Marine Corps Base, Cherry Point, N.C., Bethesda Naval Hospital, Bethesda, Md., Philadelphia Naval Hospital, Philadelphia, Pa., Portsmouth Naval Hospital, Portsmouth, Va., and the U.S. Naval Station, Key West, Fla. After serving 20 years in the U.S. Navy, she was honorably discharged and returned to her roots here in Christiansburg.

Mary Ruth volunteered for the American Red Cross and the Montgomery County Museum. She was an avid reader and loved current events of her local and state government. Mary Ruth's interest included antiquing, decorating, gardening and landscaping.

The family will receive friends on Saturday, March 13, 2010, from 1 until 2 p.m. at Horne Funeral Home. A graveside service will be held 2 p.m. on Saturday in Sunset Cemetery conducted by the Rev. Richard H. Horne with Military Honors by VFW Post #1184, Pulaski.

The family suggests memorials be made to the American Cancer Society or a charity of your choice. The Cruce family is in the care of Horne Funeral Service.