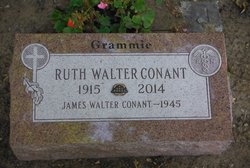 She lived in her own apartment at Vista Grande Villa and attended church services and played bingo the day before she died.

Ruth was born at Jackson's Mercy Hospital on December 28, 1915 to Charles and Florence Walter.

Ruth graduated from Jackson High School in 1934 and St Joseph's Mercy Hospital School of Nursing in Ann Arbor in 1937. On the 75th anniversary of her graduation she was recognized as Alumnus of the Year for her many achievements in nursing. Ruth served in the US Navy Nurse Corps in 1940 and 1941. She retired from Cedar Knoll Rest Home in 1981 as Director of Nursing. Upon her retirement the Jackson Citizen Patriot featured a story about her 20 years of service and leadership at Cedar Knoll. Ruth enjoyed being that special "Grammie" and Aunt Ruth to so many. She knitted baby booties for more children than can be counted, and always enjoyed reading and playing cards. Ruth has been a member of the First Baptist Church of Jackson for 80 years. She has resided at Vista Grand Villa since 2002, where she deeply appreciated the love and care of the entire staff.