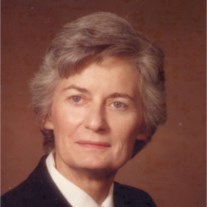 Virginia (Gin) Buford Brown was born in Elliston, Virginia, to Baxter Buford and Phoebe (Hundley) Brown, on March 13, 1926, just before the Great Depression. She was the second of seven kids, and growing up in the foothills of the Blue Ridge Mountains of southern Virginia the Brown’s were a dirt-poor but family-rich. She graduated in 1948 with a nursing degree from the Medical College of Virginia. After graduation, she served for ten years in the US Navy and Navy Reserves. Her service included two tours in 1952-53 as a Navy Nurse (Lieutenant j.g.) aboard the USS Haven, a hospital ship stationed off Busan and Inchon during the Korean War. In 1961, she received her commission in the US Public Health Service and was assigned to the Indian Health Service (IHS) Hospital in Tuba City, Arizona. She served as the Director of Public Health Nursing responsible for both field health nursing and school clinic programs in nine schools on both the Navajo and Hopi reservations. As a field health nurse, she traveled much of the western side of Navajo reservation with a Navajo driver and interpreter, taking hundreds of photographs of people and places. She went back to school in 1967 and received a Masters of Public Health from the University of North Carolina. She then moved in 1968 to the IHS Office of Research and Development (ORD) in Tucson, Arizona, setting up the first computerized health systems on reservations across the western US. Gin worked at various times with the Navajo, Hopi, Tohono O’odham, Akimel O’odham, Yaqui, Rosebud Lakota, and Fort Apache, San Carlos, and Jicarilla Apache tribes. She was with ORD until her retirement in 1981. Commissioned officers of the Public Health Service wear the same uniforms as the US Navy and hold ranks equivalent to those of naval officers. When she retired she held the rank of Captain, one rank below Rear Admiral. Her after-retirement activities included a move to Fort Collins, in 1999. Gin had compiled a huge collection of books, maps and other information on the Korean War, which she donated to the Bedford Museum near where she was born in southern Virginia. She also had a huge collection of photographs, books, and other information from her time on the Navajo Reservation and working with various tribes that she donated to the Cline Library at Northern Arizona University in Flagstaff; it is call the “Virginia Brown Collection”. Gin is survived by her son, Peter Mark Brown, daughter-in-law Elizabeth Bauer, and two grandsons, Baxter Girard Brown, and Emmett Michael Brown, all of Fort Collins; an adopted son, Sam Minkler, his two children Mark and Vicky, and several great-grandchildren, in Flagstaff and Phoenix, Arizona. She is also survived by her brother, Richard Brown, in Harrisonburg, Virginia, her sister, Sally Cline in Graham,