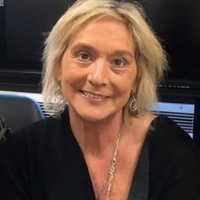 Kathryn Ann Boyd, 57, passed away peacefully on January 5, 2020 in Mount Vernon, WA with her family by her side.  Kathryn was born on July 31, 1962 in Newport News, VA to Joseph and Shirley Rakus.  She grew up in Springfield, MA.

From 1985 to 2005, Kathryn proudly served her country in the United States Navy as an oncology and hematology nurse practitioner.  In 2005 she retired from the Navy as a Commander.  During her final tour on active duty, Kathryn developed an inpatient palliative care unit.  It was the first of its kind in Navy medicine.  From 2015 until her death, she served as a nurse case manager at Naval Health Clinic Oak Harbor, assisting sailors being treated for complicated medical issues.

Kathryn had many hobbies and interests.  She enjoyed quilting, spending time with her family, attending church with her husband, reading, attending educational conferences, making her own jewelry, true crime shows on television, and the New England Patriots.  Kathryn and Phillip were longtime members of the Cornerstone Baptist Church in Anacortes, WA.

Kathryn is preceded in death by her close friend Juana Wilson, her son Joseph, and her parents Joseph and Shirley Rakus.

A celebration of life will be held on Friday, January 10, 2020 at 1:00pm at the Base Chapel at Naval Air Station Whidbey Island.

Donations can be made in Kathryn’s name to the Wounded Warrior Project.