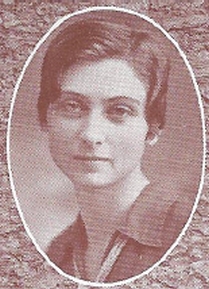 She was born on a farm near Bryant, Illinois, on February 9, 1912, to John and Phoebe Clark Barclay. She received her nursing diploma from Graham Hospital Training School for Nurses in Canton, Illinois in 1938.

She enlisted in the Navy in 1942 and served as an operating room nurse during World War II and Korea. She served in the Pacific and on the West Coast of the United States and later served at many stations all over the United States. While she was in the service, the Navy sent her to the University of Colorado at Denver, where she completed the four-year program in Nursing and Institutional Administration in only two years. She retired from the Navy in 1964 with the rank of Lieutenant Commander, and at the time of her death, was the oldest retiree from the World War II Navy Nurse Corps.

Miss Barclay was a long-time member of the D.A.R. She served as Regent of the Borough of Norfolk Chapter of the Daughters of the American Revolution and served as Virginia State Chairman of Genealogical Records. She was a member of the Norfolk Genealogical Society and made several trips to Ireland to research her family's history. She was a member of the National Society of United States Daughters of 1812, a charter member of First Families of Massachusetts Bay Colony, Colonial Dames, and a charter member of First Families of Licking County, Ohio. She served as a docent for NASA Langley Air Force Base from 1983 to 1988.

Miss Barclay loved animals. She had a number of pets including dogs, her beloved cats, and a semi-tame crippled raccoon. Failing health and eyesight forced her to move to the Lydia Roper Home for her latter years, and she missed her pets dreadfully. Miss Barclay was a life-long Methodist, most recently a member of Wesley Memorial United Methodist Church.

In February of 2012, Miss Barclay marked her 100th birthday with a celebration attended by over one hundred guests. Numerous active duty and retired Navy nurses and other Navy personnel came to pay their respects, as well as her friends, representatives from the American legion, and from the D. A. R. She received greetings from Senators Mark Warner and Jim Webb, and from Mayor Paul Fraim and the Norfolk City Council, among many others.

Miss Barclay is survived by a niece, Patricia Farrar; and a nephew, John Barclay, and his wife Teresa, all from Arkansas. There will be a graveside service at Forest Lawn Cemetery at 10:30 Saturday morning. Memorial gifts may be made to The Lydia H. Roper Home, 127 E 40th St. Norfolk 23504.