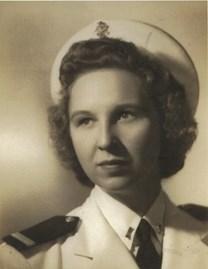 Lt. Anna Kaseta Edrington, United States Navy Nurse Corps was a member of the Greatest Generation. She was born in Elizabeth, N.J., August 29, 1916. She was a child of the Great Depression and graduated from nursing school in 1938. She worked at Elizabeth General Hospital then joined the U.S. Navy in 1940.

She received orders and traveled by convoy to Pearl Harbor 90 days after the Dec. 7th attack that started WWII in the Pacific. She and her fellow nurses treated the soldiers and sailors who were wounded in the numerous Pacific campaigns.

She returned to private duty nursing in 1964 and worked as a private duty nurse until she was well into her 70s. She and her husband, the late Capt. Harold Edrington, lived in Southern Pines, N.C., until his death in July, 2003.

She lived the final years of her life in Tampa, Fl., the final eight spent at the home of her son. She loved her country, the U.S. Navy, her family and friends. She is survived by her sister, Marie Kleiner of Flemington, N.J., son Thomas of Tampa and daughter Janet of North Palm Beach, grandchildren Courtney and Rickie. She loved her country, her family her friends, the U.S. Navy, Duke basketball, AmVets Post 4 and her son’s Florida Executive Realty family.

The final days of her life were spent at her home, where she wanted to stay. She passed away quietly on July 11, 2015, a month short of her 99th birthday.