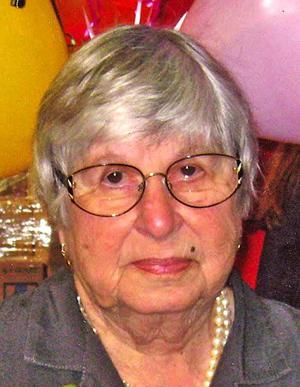 Olga Creighton came into this life with nothing. She was the youngest of eight children born to poor Lebanese parents. She lived through the Great Depression, World War II; the Korean and Vietnam Wars. In the end, Olga had everything she could ever hope for.

Known affectionately in Coronado as the “Garage Sale Queen,” Olga and her husband owned Bert’s Antiques where the San Diego Gaslamp Quarter is today. She was co-founder of Artisan’s Alley in Coronado and made a lifestyle out of orchestrating large estate sales for her clients. She worked right up until her passing.

Olga Creighton, the woman who never smoked, drank or cursed, and who rode the valleys and mountains of life with a great sense of humor, passed from natural causes on May 3rd. She was 89, and died surrounded by her loving family.

Born in Perryopolis, Pennsylvania in the summer of 1925, Olga was the youngest of eight children to Abraham George Farrah and Jamilia (Murray) Farrah. Her parents owned a dry goods store.

Olga’s parents were hard working, honest people who did the best they could during the Depression. They would barter with a chicken, or clothing; or forgive a customer’s debt altogether just because it was the right thing to do.

As an example of their thriftiness, Olga’s daughter Ginny recalled her mother’s first major purchase. “Mom grew up so poor they never had dolls or toys. When she got her first paycheck as a nurse, all she wanted to do was go to I. Magnin and buy a dress. That was a really big deal for her.”

Olga Farrah attended Ramsay High School in Mt. Pleasant, Pennsylvania. She began a nursing education at Latrobe and then transferred to Indiana State Teacher’s College (now Indiana University). She trained at St. Francis Hospital, near Pittsburgh, studying in the field of psychiatry. She attended Children’s Hospital for Pediatrics as a registered nurse (RN).

She served in the US Cadet Nursing Corp from 1944 until graduation in 1947. Shortly thereafter Olga entered the Navy as an ensign and was promoted to lieutenant junior grade continuing to practice her skills as a RN all the while. This was during the Korean War, and Olga’s primary duties were caring for returning, wounded Marines (many of whom were paraplegics and quadriplegics).

As a Navy nurse Olga worked on both coasts, performing her skills at naval hospitals including Oakland, California and Key West, Florida. She met her husband in Key West through an introduction from friends and began to date regularly. Before the year was out Bert Creighton, a young naval aviator, received news of his deployment and made a hurried proposal.

It was right before Christmas and Olga had to borrow everything she needed to be married. They found a chapel, a priest, and walked under a canopy of raised swords held aloft by Bert’s squadron mates. Then, as rapidly as they married, Bert deployed. There was no time for a honeymoon.

Son, Bert (“Ty”) remembered a favorite story of his mother’s. “Dad’s idea of fun was to take his wooden speedboat, a classic Chris-Craft, out on the water and gig lobsters. He thought that was the greatest thing – a boat ride and lobster. Mom, however, didn’t enjoy being on the water. She couldn’t swim and she got seasick. After several of these dates she pulled him aside and said, ‘You know, I really love you, but not on that boat.’ He had to sell the boat, but he won the woman of his dreams. I just wish they had kept that Chris-Craft,” said Ty.

The young couple had three children, but being a Navy wife meant that Olga had to perform the duties of both father and mother much of the time as Bert was frequently deploying to sea.

Olga learned early in life the necessary focus and strength to get through hardships. She had a soft, embracing side that friends and family grew to depend upon; but she also seemed to be able to take control of challenging and unexpected situations quickly, and she always knew which characteristic to bring to the table.

An example of that soft side occurred while driving in New Orleans with her husband. She spotted an abandoned beagle tied to a tree. Olga quickly untied the ragged pup and took him home. From that point on, the Creighton household included beagles. They got a second dog, and that resulted in five beagle pups. They were named using the Aviator’s Alphabet - Able, Baker, Charlie, Dog and Easy.

Olga always felt the two things she was most suited to do were nursing and motherhood. She embraced both with equal passion. The family first came to Coronado in 1964. They transferred to Hawaii (1966-1969) and then moved to Naval Weapons Center China Lake before returning to Coronado in 1971, where they remained. Bert retired from the Navy in 1975 as a Navy Captain.

Nursing was a natural direction for Olga to move into. She took care of people her entire life. It was her hallmark. She cared for family, friends and anybody in need. She could walk into a room or a restaurant and hear an accent and say, “What part of Pennsylvania are you from?” She personified the phrase, “people person.”

So often, young Navy couples would marry days, or even hours before a deployment. Then, the young brides were left to discover how to live on their own; to find their way around a strange naval base; where to take a sick child; or even to shop. Olga was always there to help the young wives in the squadrons.

She opened wide her arms and invited everyone, whether she knew them or not, into her embrace; into her home. This is the legacy of Olga Creighton.

In the Navy she was the organizer of parties and events catering to Navy wives in similar situations. In civilian life she would often invite the entire cheerleading team or football team home for dinner on a moment’s notice. She made sure everyone felt like they were part of the family – which they were.

“Mom was a Cub Scout Den Mother,” said daughter Ginny. She organized overnight trips for the kids, oversaw ballet class, and even helped construct small, wooden cars to allow her son to compete in the Pine Car Derby.

In the early 1970s she and another parent, Sue Shanahan, started Artisan’s Alley, a tradition in Coronado for more than 40 years. It continues to this day. Through this endeavor they raised funds for the high school band and school choir.

In addition to being a mother and father rolled into one, Olga remained active with other Navy wives. During Vietnam, she supported Sybil Stockdale and the POW wives through fundraisers and support groups.

Bert Creighton was based on Cmdr. Jim Stockdale’s carrier the day Stockdale was shot down and captured. Ironically, Sybil Stockdale was tutoring young Ty Creighton that same day when Navy messengers came to deliver the news. “I remember she looked at me and said, ‘This is going to be bad news,’” Ty recalled. “But she remained strong throughout – a Stockdale trademark we would all come to know in the years ahead.”

Once Olga rallied many of the San Diego POW wives for a long drive and picnic at NWC China Lake - in the high desert. They all loaded up their station wagons with family. Once at China Lake, Olga and Bert organized the felling of small trees from the forest - cut down by children and friends. The trees were then lashed to the roofs of the cars, then the entire procession of wives, children, trees and station wagons returned to San Diego to prepare for another Christmas without dad.

Bert Creighton died in 2007. By then Olga’s work had become her crutch. She once again became an only parent, although now her focus was on her grandchildren – many of whom she financially assisted in attending college.

The moniker, “Garage Sale Queen,” began early in life. When the family first came to Coronado they lived at the Naval Amphibious Base. Again, most of the husbands were overseas on deployment. So Olga decided to attend her first garage sale. Coronado garage sales had become legendary. They began in WWII when navy wives would hold sales to help supplement their existence.

Olga came home with numerous items that day, and one she just couldn’t carry. It was a patio sale, and Olga bought the entire patio. “We had to take it apart, load it into the car, and then rebuild it,” recalled her son Ty. “We had to get permission from Public Works, and then put it together like a large puzzle – red brick floor, redwood beams, awnings, screens.”

From that point on Olga was hooked on garage sales. The more she attended, the better she got at knowing what to buy and where. Bert’s Antique Shop was a direct result of Olga’s garage selling. Eventually families would hire her to orchestrate massive estate sales in both Coronado and San Diego.

Sarah Holder frequently worked with Olga on estate sales. “Olga was one of Coronado's great ladies,” said Holder. “Her estate sales were wonderful to be a part of. I think they were, in large part, social events for Olga; everything from the planning and the preparing, to cleaning and labeling, to the actual selling and final sweep. She was meticulous and she was professional every step of the way.

"… but mostly I admired her for her

Olga was a class act.”

“The day of a big estate sale,” said Holder, “Olga would always show up with an abundance of pastries, fruit, drinks and salads picked up from her favorite market. Or she would bring us all lunch from Panera, or, afterwards, she would invite us all to Tartine’s for a meal.

“She worked incredibly hard right up to the end, but was lucky to love what she did and she certainly knew her stuff. I admired her for her knowledge and respect of antiques; for her work ethic; but mostly I admired her for her complete devotion to her family. Olga was a class act,” said Holder.

Olga Creighton was active with Coronado Republican Women and families of Vietnam POWs. She supported Navy and civilian chapels and churches as well as her children’s school and extra curricular needs, whether it be sailing, music lessons, Boy Scouts, Girl Scouts, dancing or sports.

Private services are scheduled for family and close friends at the Admiral Kidd Club on the Anti-Submarine Warfare Base, Saturday, June 6. Her ashes will be interred at Fort Rosecrans next to her husband, retired Navy Captain Bert H. Creighton Jr.

The family requests that in lieu of flowers, donations be made, “In Memory of Olga Creighton,” to the San Diego Armed Forces YMCA or the San Diego Humane Society.